The Election's Impact on the Energy Industry 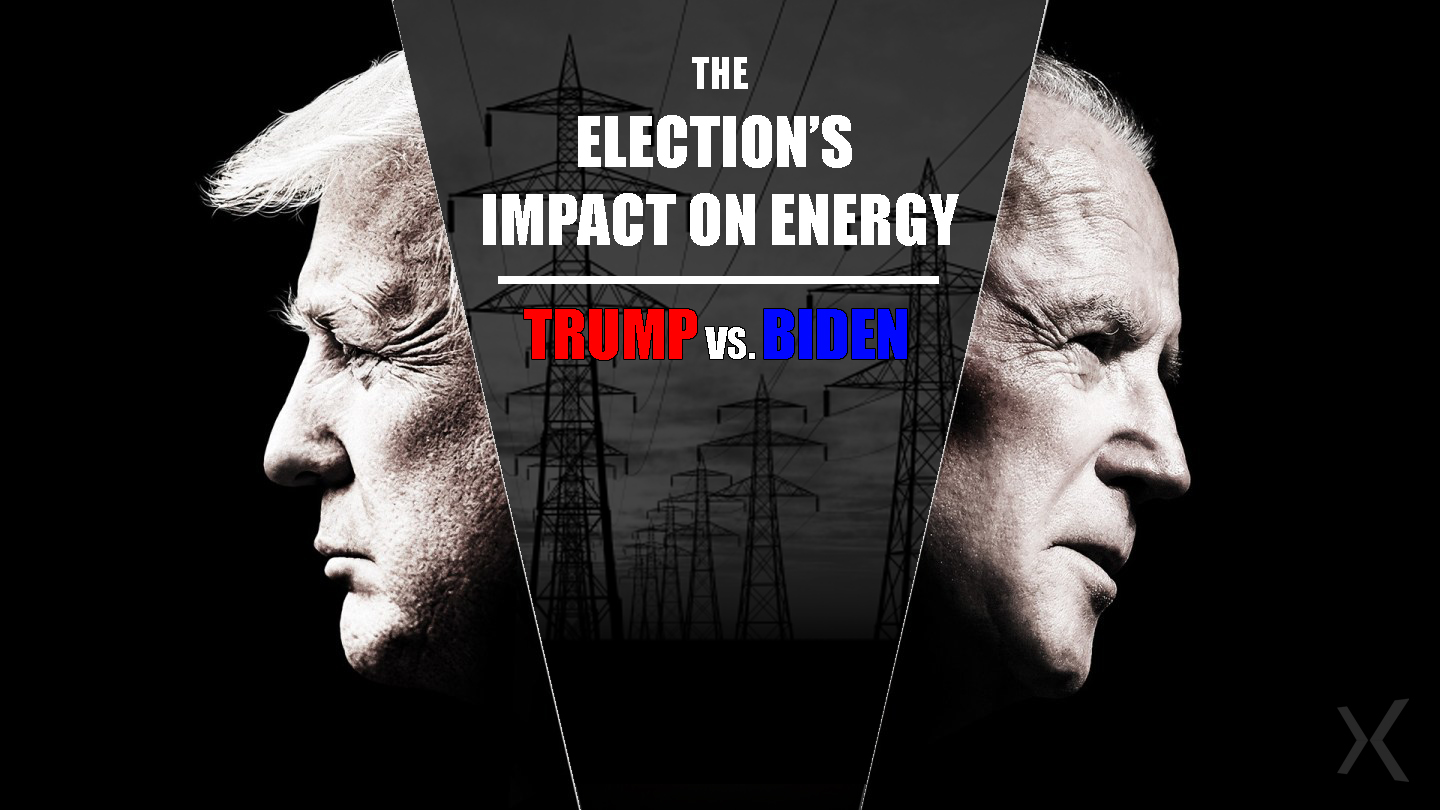 Political analysts, subject matter experts, and voters across the country widely expect the 2020 U.S. Presidential election to be one of the most consequential and contentious in modern memory. In many areas, the differences between incumbent President Donald Trump and his opponent former Vice President Joe Biden could not be starker, and so voters will no shortage of issues to consider as they head to the polls (or mail in their ballot).

For stakeholders across the power sector, the potential impact of the candidates’ divergent policy platforms rings especially true with the future of the U.S. energy industry (for at least the next four years) looking quite different under a Biden Administration than it would a second term under the Trump Administration. With topics including the Paris Climate Accord, positions on fracking, support of the Green New Deal, and more having popped up in both of the Presidential Debates as well as the only Vice Presidential Debate, these candidates have not been shy about their positions. And with nearly four years as President for Trump and, prior to that, eight years as Vice President for Biden, voters certainly have some evidence on how the candidates would back up their promises.

As the campaigns wind down and voters already flock to vote by the millions in every state, let’s take a quick look at what the direction of the U.S. energy industry will be under either outcome:

The Future of Clean Energy

Looking at the past four years under President Trump, renewable energy has not received a significant focus at the federal government level. Among the most significant energy promises his campaign in 2016 ran on was the repeal of the Clean Power Plan that had been implemented by President Obama. The Clean Power Plan had targeted the power generation sector directly in mandating the amount of emissions they would be permitted in a manner that would naturally make it difficult for fossil fuel plants to remain competitive over time, while clearing the way for renewable energy. By repealing the Clean Power Plan early in his first term as President, Trump has not made any measurable progress towards implementing new renewable energy measures.

Such a hesitance to embrace renewables should not be a surprise for those familiar with Trump’s views, regularly denouncing wind energy as being hazardous to birds, insisting that its inherent intermittency would leave consumers without energy when the wind didn’t blow, and erroneously claiming that the noise could even cause cancer. So, while renewable energy generation capacity has actually increased by an average of 9% per year since 2016, that growth in renewable energy is attributed to improvements in technology, drops in renewable prices, state and local government action, and other factors outside of the Executive Branch. And looking at the rhetoric coming out of Trump and his campaign team, no change in course appears to be in play when it comes to a potential second term.

Vice President Biden, on the other hand, seeks to differentiate himself from Trump on energy issues, with commitment towards renewable energy being a cornerstone of his plan. During the Democratic Primary elections, much debate circulated about the Green New Deal plan and which Presidential hopefuls did or did not support it, with Biden firmly declaring he did not endorse the full sweeping measures in the legislative language. The Vice President did, however, solicit assistance from key architects of the Green New Deal, such as Congresswoman Alexandria Ocasio-Cortez and Senator Bernie Sanders, to be a part of his Climate Task Force, which resulted in the official Biden Clean Energy Plan.

As the number two in command during Obama’s Presidency which saw the passage of the Clean Power Plan and the commitment to the Paris Climate Accord, Biden would be expected to go all in embracing renewable generation targets, and his official plan reflects that.  Biden’s campaign platform plainly outlines the need to “move ambitiously to generate clean, American-made electricity to achieve a carbon pollution-free power sector by 2035.” In his plan, Biden details the roadmap to get to that point, which includes extending tax incentives for clean energy, developing financing mechanisms so private sector funds can go towards renewable energy projects, and the establishment of a technology-neutral Energy Efficiency and Clean Electricity Standard (EECES) for utilities and grid operators. These actions, combined with a bold $2 trillion investment plan that includes research & development of energy technology and renewable energy rollout, back the idea that Biden is looking to not just get back to where the Clean Power Plan left off before Trump eliminated it, but he’s looking to take renewable generation much further.

The Fate of Fossil Fuel Generation

If Trump and Biden diverge on the role that renewable energy can and should play in the present and future of the power industry, then it should come as no surprise to see their positions on fossil fuel generation reflect competing priorities as well. When President Trump discusses his successes regarding energy, he’s typically referring to his policies that have given a jolt of life to the fossil fuel industry. If repealing the Clean Power Plan was the first priority for Trump, then his ‘America First Energy Plan’ demonstrated how critical fossil fuels were to his priorities. Trump promised to build up the oil and gas production industries in the United States so that America could achieve energy independence, which came via opening up new lands and waters to drilling, rolling back environmental regulations that made fossil fuel production more onerous, and unburden the power generation industry of Obama-era regulations.

Largely speaking, the first term of Trump’s Presidency was successful in these efforts. The United States is not energy independent, but for the first time on record became a net oil exporter. And not only did the Trump Administration repeal the Clean Power Plan and environmental protections that impeded oil and gas production to go to fossil fuel generators, but he also announced his intent to withdraw the United States from the Paris Climate Accord. While he can’t fully remove the country from the agreement until a potential second term, Trump’s posturing here is another way where he has demonstrated and followed through on an intent to protect the business interests and the future of fossil generation. As the Trump campaign seeks to win votes for the 2020 election, the pathway forward is strictly one of staying the course. As a senior official in the Trump Administration noted when asked about the future of Trump’s fossil fuel policies should he get reelected, “Much of what was on the to-do list when I arrived has been accomplished already.” For the voter, that means recognizing that policies enacted during the first term of Trump’s presidency would simply be extended during his second term. And for the Trump campaign, their message is that these policies have benefitted what they call American energy dominance and any backtracking a Biden Administration would do to them would spell economic disaster for the country.

Rather than position his policies on fossil fuel generation as economic risks, though, the Biden campaign seeks to enhance clean energy and recognizes that doing so will come at the cost of fossil fuel generation. The intent to decarbonize power generation by 2035, as previously mentioned, certainly spells trouble for the oil, gas, and coal generators currently on the grid. However, the exact policies and measures a Biden Administration would take—whether that’s direct mandates, incentives for carbon-free power, penalties for carbon emissions, or otherwise—remain unclear. Should Biden move to re-institute the types of measures that were outlined in the Clean Power Plan from the Obama-Biden years, which is likely the most direct policy-based evidence available for charting the likely pathway forwards, then of course the outlook for fossil fuel generators will be notably bleaker than they would under four more years with President Trump.

That said, Vice President Biden has certainly continued to try and eliminate the complete doom and gloom outlook that fossil fuel generators may foresee should he win the election. Despite attempts along the campaign trail and in head-to-head debates for Team Trump to paint the Biden Camp into positions of wholly adopting the Green New Deal as well as favoring a complete ban of fracking for natural gas (which is key to the continued viability of natural gas generation), Biden’s official positions refute those characterizations. And with a nod towards the plight of communities that rely upon the fossil fuel generation industry for their livelihoods (and, surely, in no small part to also walk the political tightrope to still earn their votes), the Biden Clean Energy Plan charts out the intent to create jobs in oil, gas, and coal communities, such as in activity to plug abandoned oil and gas wells, reclaim abandoned coal mines, and establishing a Task Force that secures benefits and targets investment in these communities amid a time of economic fear for them. So, while Trump’s campaign may seek to portray Biden as someone who will take the most aggressive stance against fossil fuels, the fact is that those in his party who would like to see him do so are likely disappointed he’s not going further.

The direction of the power generation sector will without a doubt be altered on November 3 (or whenever the results are finally known), and those with a stake in the industry will be watching carefully. For a potential Biden administration, a win could mean re-instituting the types of policies and regulations that had originally been instituted by Obama, while a Trump re-election would allow the industry to continue its current pathway.

What’s noteworthy, though, is that this yo-yo back and forth between Presidential Administrations and requirements being the band-aid solutions are short-term fixes at best. Until more comprehensive legislative action can put robust and resilient laws on the books, the nation is likely to see this type of push and pull every four to eight years. In the end, though, the power industry is continuing to move towards cleaner sources of energy and away from a dominance of coal and gas that was once the standard. Economics, resource scarcity, and international pressure will ensure that progress down that road continues, but the results of the 2020 Presidential Election will surely influence the speed at which that pathway is traversed.

To learn more about BrokerX software, email Matt at matt@brokerxapp.com, call 312-725-0028 or click here to schedule a DEMO.