The Biggest Energy Industry Stories of 2020 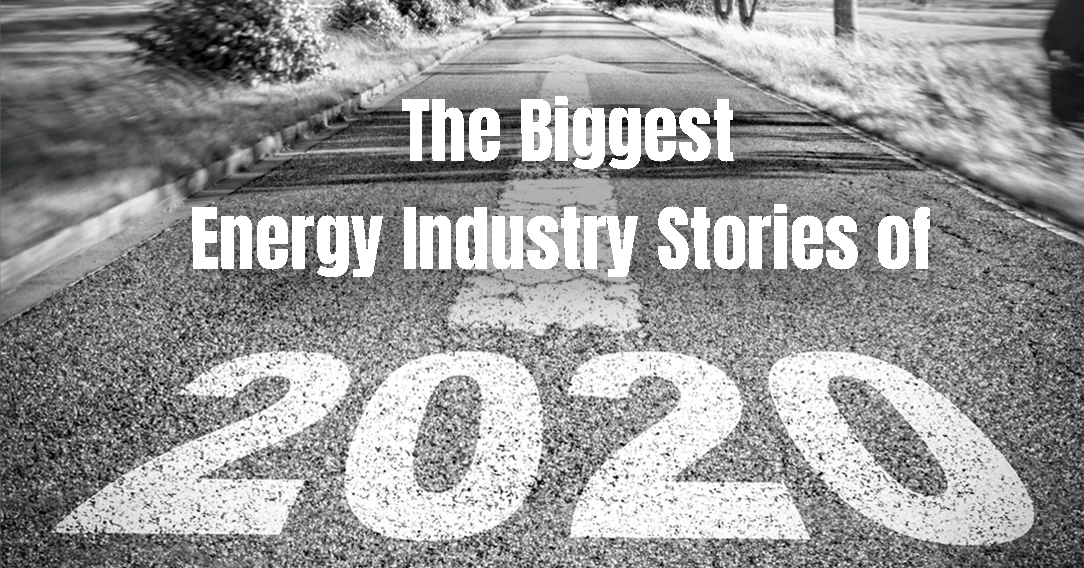 Year-End State of the Industry

The end of one year and the start of another is traditionally a great time for us all to look backwards to reflect on successes, challenges, and lessons learned, while simultaneously peeking forward on the possibilities that the year ahead of us will likely bring. That habit is especially critical in such a rapidly transforming sector as the energy industry, and further it couldn’t be truer than in the unbelievable year that 2020 was.

In this article, we will share what we think were the three biggest, most influential, and most important energy industry stories of the past twelve months.

No review or assessment of 2020 would be fair if it didn’t start with the single biggest thread that run through everything throughout the year, the COVID-19 pandemic and all the resulting fallout. Every inch of the global economy felt the weight of this unpredictable situation and the various mitigation strategies, enforced lockdowns, and changes to daily habits that COVID brought. As we covered in a recent article, various national and global energy markets were directly and immensely impacted by the COVID-19 pandemic, which is itself a major story for the energy sector. But from the consumer side, COVID had another major impact to energy services in 2020, and that was forcing utilities to adapt to virtual operations.

For health and safety precautions, many utilities had to keep their employees working remotely and virtually from their own homes, just like the rest of the country. For some workers, that transition was fairly easy as they could get the same work done on their computers at home. But for certain aspects of the utility business, the need for workers to remain virtual proved an interesting challenge. A key example came with home energy audits, which would typically see utility workers sent out to customers’ homes in person to walk around and identify opportunity for energy savings such as through replacing inefficient lightbulbs, identifying areas of the home where heat was escaping, or other opportunities that may require an expert eye. To ensure customers could continue to tap into potential energy savings during the time of social distancing, many utilities took their home energy audits virtual. Thanks to video calls, these experts could still be shown around customers’ homes to identify savings opportunities. Other utility workers in the field saw changes thanks to the need to stay safely distanced from coworkers and members of the community. Many utilities have looked to leverage sensors and digital technologies to automate the process of evaluating problems on the grid or in customers’ homes, removing the need to unnecessarily send workers out into potential harm’s way. What’s notable about both of these virtual utility adjustments, as well, is that in the end they may be more affordable and effective methods for the utility industry, reducing overall costs of the programs. As such, don’t be surprised to see many of these virtual services persist in a post-COVID world.

2.) Questions on Grid Reliability and Planning for the Future

Another trend that popped up multiple times in 2020 that was a cause for concern was trying to ensure grid reliability amid exterior challenges. California has been ground zero to numerous of these reliability issues, notably experiencing unexpected power outages in late summer and the persistence of rolling power shutoffs thanks to wildfire concerns. While the energy sector is daily working towards a more affordable and lower carbon grid, those are secondary concerns compared with the one essential characteristic that the power grid remains reliable. While outages are at times unavoidable during severe storms or unpredictable outside events, the situation in California has seemed to spur some intense debate on the cause of the grid reliability issues as well as the proper solution.

Some have looked to blame California’s power reliability issues on its high rate of adding renewable energy to the grid. Since solar panels don’t work when the sun doesn’t shine and wind turbines are useless when the wind isn’t blowing, this overreliance on renewable energy at the expense of coal, gas, or nuclear primes the state for such issues. As Henry Olsen wrote in the Washington Post, “stress is particularly acute for a system that relies on renewable energy because that source cannot be dialed up or down to meet demand. The sun is going to shine, and the wind is going to blow for the time and intensity nature allows, regardless of human desire for comfort.” Those in this camp argue that the solution is less renewable energy and more dispatchable power plants funding the grid. Of course, renewable energy advocates don’t readily agree with this assessment, noting that the issue was not that renewables were on the grid, but rather that the energy markets were unprepared for an unexpected outage at a gas-fired power plant, combined with particular excessive heat waves that drove up demand and reduced the ability for California to pull in electricity from neighbors as it often does during times of grid stress. In fact, the challenges to grid reliability brought about this summer in California are an example of exactly why renewables on the grid are so important, according to Leah Stokes of the University of California, Santa Barbara: “This heat wave all across the West is a signal of climate change. And this situation tells use we need to take some serious steps to get on track towards a zero-emissions future.”

The increasingly digital state of the power sector means that utilities have more opportunities to benefit customers, ratepayers, and the energy sector as a whole, but unfortunately it means there are more potential areas of vulnerability to cyber-attacks. Whether the cyber threats are coming from rogue bad actors, organized nation states, or unknown entities, the need to keep the grid secure from cyberattack has quickly become one of the most important areas of focus for stakeholders in the energy industry. Even scarier, an entity protecting their grid-tied assets securely doesn’t necessarily mean they are completely safe, as the whole grid is interconnected and a single vulnerability on the grid can put at risk all actors elsewhere on the grid who did everything right. This fact came to the forefront this past Spring when President Trump signed an executive order on securing the U.S. bulk power system by limiting use of transformers and other equipment on the power grid that are manufactured by adversary governments, in this case China being the main nation in mind. The concern here was that a Chinese-made transformer could include ransomware intended to then infiltrate the grid when installed, and because those transformers were cheaper the worry was they were natural to be chosen by grid operators otherwise. But in the wake of that executive order, much confusion arose about exactly what the order meant, how it would be enforced, what equipment was and wasn’t OK, and whether the order came too late to prevent security threats already on the grid via these pieces of power equipment. And given how integrated Chinese electrical equipment is generally, the executive order could perhaps be too little, too late. As one grid cybersecurity expert was quoted as saying, “There are suppliers of suppliers. The question is how far do we go,” Whitney said. “All the way down to the microprocessor? The chip? The mother board? … The devil is going to be in the details, and helping utilities understand what is the scope not only in terms of large assets, but within technology and subcomponents, where to draw the line. There needs to be much more fidelity around that conversation.”

While the Bulk Power System cybersecurity discussion dominated the middle of the year, the end of 2020 brought further cybersecurity worries for the energy sector up to the surface, this time with Russia being the foreign adversary accused. The U.S. IT services provider SolarWinds found that its Orion software was compromised by highly sophisticated cyberattacks, creating panic across all enterprises that utilize the software. Unfortunately, a number of major power utilities (not to mention the U.S. Department of Energy) are examples of such enterprises, and concerningly this hack took place months before they were discovered and so the scale and pervasiveness of the operations are unknown and potentially radical. With major utilities having been affected, even those that haven’t used the SolarWinds software are acting as if they have been compromised and enterprise-wide systems need to be scrubbed for potential intrusions, because to miss any could mean intentional and consequential disruption to the U.S. grid. The challenge, though, is that “Not all organizations are equipped for this, not all of them have the talent to do this, or the tools to do this, or the time to do this,” according to grid security experts.  But utilities and actors across the power grid have no choice, as an attack to the U.S. grid system could end up as one of the most devastating outcomes imaginable. In the world of grid security, cyber professionals must continue to try and stay three steps ahead of bad actors, and while largely that is the case, the events of 2020 have shown how the goalposts are constantly moving and its an ongoing battle that must be a pinnacle priority of all energy providers.