The 2020 Election: What Did the Voters Tell Us About Energy? 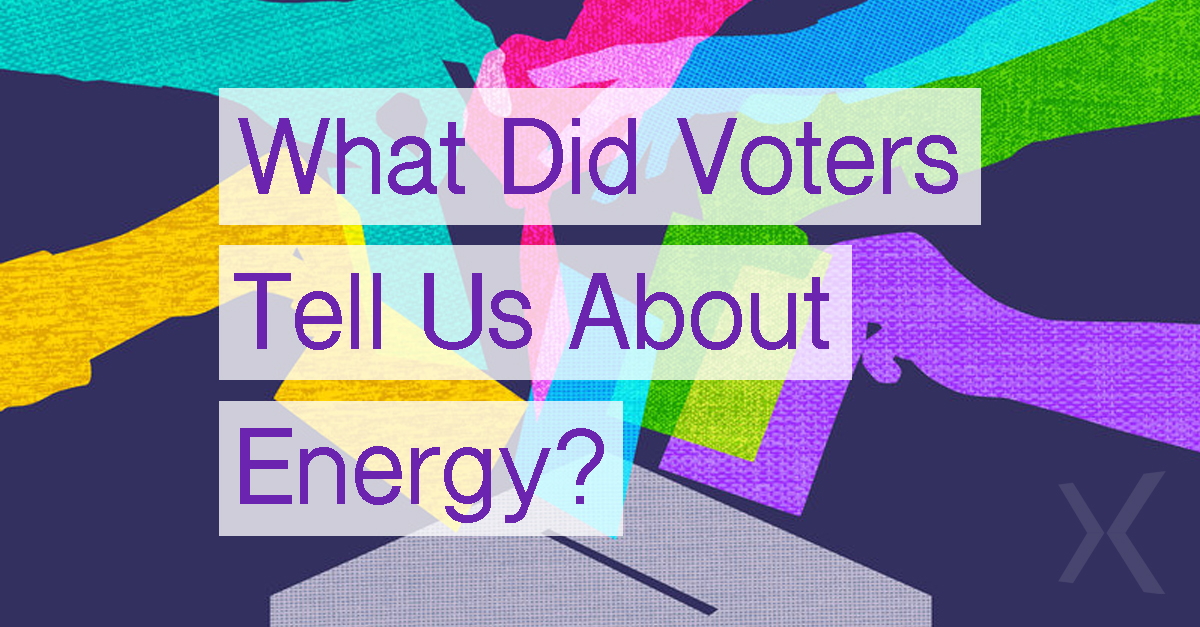 The 2020 Elections Are (Mostly) Behind Us, So What Did Voters Tell Us About Energy?

After an undoubtedly tumultuous election season where a record number of Americans turned out to cast their ballots, everyone is now left to make sense of what transpired. Votes were cast not just for President, but also for Congress, statewide legislatures, local officials, and even ballot measures, and that means we now have a sea of information on issues voters care about, what motivates them to get to the polls, and what the impact of each of those decisions will be in the coming years.

From the top of the ticket down, the 2020 election season was one that featured the energy industry and associated issues more than any other in U.S. history. From high profile discussions of climate change to local candidates running based on issues related to how the utility industry in their region is run, it’s clear that Americans are thinking more about energy and their power providers than ever before, at least when casting their ballot.

So now that the pollsters are settling in for some well-deserved rest and Nate Silver will tuck in for hibernation until next election cycle, what did we learn about voters across the nation and how they think and feel about the energy industry today?

When polls are being taken of eligible and likely voters in the days, weeks, and months ahead of an election, experts aren’t looking to just figure out who people are voting for, but perhaps more crucially they’re looking to understand why voters are pulling for one candidate over the other. One of the key ways in which they do that is to ask survey respondents how much they care about various issues that are being campaigned upon. Some election cycles are more dominated by the economy, others by healthcare, others for foreign affairs, and dozens of other issues. This year, COVID-19 understandably became among the most pressing issue to voters, as impacts on public health and the national economy have been immense and long-lasting thus far. According to Pew Research, the top issues that voters ranked as important to their vote were the economy (79% said it was important to their vote), healthcare (68%), and the coronavirus outbreak (62%). Climate change trailed behind several spots, with only 42% of voters identifying it as an issue that is critical to their vote.

Even though the 2020 Presidential Election race was the first time that climate change was brought up in each of the official debates, with each of the two candidates offering starkly different views on the path forwards on climate and for energy as a whole, polling still shows that energy-related topics are still relegated to a second-tier issue of importance with most voters. While other issues like the Supreme Court, violent crime, foreign policy, gun policy, immigration, and racial and ethnic inequality all ranked as a top issue for over half of the electorate, climate change can still be overlooked by candidates and not be disastrous for their races. And as long as that trend holds where the big picture issues like climate change aren’t receiving top billing, it’s hard to imagine the more industry-specific issues for utilities and power providers will be the ones to move the needle. Even more damaging to the outlook of voter priorities, research finds that climate change and the environment are the two issues with which there is the greatest partisan divide between voters and the issues they care about. Until bipartisan support for these issues is more commonplace, expect surveys to continue to show energy-related issues as less important to the general electorate.

As noted in a previous post, the difference between President Trump and Vice President Biden couldn’t be starker in terms of where they see the future of the American energy industry. Biden was billed as the clean energy and climate change candidate, and while he stops short of endorsing the Green New Deal or banning fracking (despite his opponent’s claims otherwise), his clean energy plan is undoubtedly the most ambitious of any major party Presidential nominee in history. In contrast, President Trump seeks to continue touting the importance of American energy and the work he’s done to bolster domestic oil and gas industries. From the Presidential candidates, the messages diverted quite clearly and it was evident that any voter who felt strongly on these issues one way or the other didn’t have to second guess which candidate was in their corner.

But because of the previously described polls that show climate and energy issues are, on average, a lower priority to voters, it became clear that these differences in energy policy and messaging would likely not be the make or break difference in the Presidential election. But how voters ticked the ballot further down the ballot certainly can tell us more about the energy mindset of voters.

For Congressional races, candidates navigate a different sea than do Presidential candidates as these potential Representatives and Senators are speaking just to their local region and appealing to their messaging. What works to garner support from a majority nationally will not always reflect the energy-related priorities of more local communities who have a different viewpoint based on how certain policies and decisions will affect them specifically.

A perfect example of this change in messaging came from the race to represent Oklahoma’s 5th District in the U.S. House of Representatives. Oklahoma is a state that produces a lot of oil and gas, serving as a huge boon to the state economy. As such, the messaging from President Trump to bolster American fossil fuel production would resonate a lot better than Vice President Biden’s efforts to shift to a clean energy economy. But when zeroing in on the House election, the Democrat candidate, Kendra Horn, had to work to distance herself from the rhetoric against fossil fuels if she wanted to retain the support of her local Oklahomans. Horn’s opponent, Republican Stephanie Bice, used Horn’s votes as a member of Congress to limit oil and gas drilling in protected areas and other similar measures as evidence that she was no friend of Oklahoma interests. In response, Horn had to stress that while she is concerned about climate change, “We need an all-of-the-above approach..It has to have oil and gas as a piece of it.” Horn having to thread this needle to still show support directly to oil and gas is a challenging balance to strike, and the local voters, in the end, did not trust her to protect their oil and gas interests, so Bice won. This vote, a reversal from Horn’s first win two years ago, reflects the anxiety oil and gas regions are feeling regarding the future of these fossil fuel industries.

To look at an example on the other side, Republican Colorado Senator Cory Gardner was ousted by Democratic challenger John Hickenlooper. Hickenlooper had made a bid for the Democratic Presidential nomination a year earlier, and one of the messages he had run on was the importance of climate action. When those efforts fell short, he turned his sights on the Senate seat occupied by Republican Cory Gardner. Hickenlooper made his climate change plans, with a call for net-zero energy generation by 2050, a central part of his platform. Gardner argued that this position and Hickenlooper’s calls to make fracking obsolete amounted to a death knell for energy jobs in Colorado’s rural communities. In response, Hickenlooper emphasized the importance of a clean energy transition and how Colorado’s workers could be a key part of that with skills training for displaced workers and incentives for new businesses. Ultimately, Hickenlooper’s calls for clean energy won out as he unseated the incumbent. The message here is that Colorado’s voters didn’t see the clean energy efforts of Hickenlooper as a betrayal like Oklahoma voters did, underscoring the importance of local political climates and the challenges that national parties have in coming together on these energy-related issues for broad action that still allows them to appease their local constituents.

Outside of just electing representatives, many Americans had the opportunity to vote directly for ballot measures that would decide the fate of the path their states would take.

In New Mexico, voters were tasked with deciding whether their electric utility commission should switch from elected officials to nonpartisan appointed measures. With 55% of the vote, New Mexicans decided that this switch was indeed in the state’s best interests. For example, despite the Governor of New Mexico signing into law a mandate that state utilities generate 50% of their power with renewables by 2030, the partisan electric utility commission had been slow to enforce the measures required to make this happen. By voting to remove the partisan aspects of this regulatory body, though, an NRDC representative noted that “In New Mexico voters have shown we want clean energy leadership. Now we need an expert [electric utility commission] that can implement that vision, not politicians that might second guess it.”

Another state where voters could directly influence the clean energy direction of their future was Nevada, where Ballot Question 6 proposed a requirement for utilities to generate half of their power from renewables by 2030. Nevadans approved this proposal two years ago, but to become a part of the state’s constitution requires approval in consecutive elections, and clean energy support in the state came through once again. While opponents of the measure suggested the utility could be a renewable energy leader without such a mandate, and baking this requirement into the constitution could be costly for ratepayers and harder to undo if new information would make that necessary, voters wanted clean energy to win out.

Where Does the Energy Voter Go Next?

These energy-focused races are just a few examples of the many more that occurred in recent months nationally, but they highlight the entire snapshot on the energy voting today in America. In general terms, Americans do, in fact, support clean energy and action on climate change. And when races are directly focused on those issues, then the decision becomes clear. However, when races include other issues that are more pressing to them—local economic conditions being the top example, especially in communities supported by the prosperous fossil fuel industries—then the outlook immediately gets murkier. Will energy issues become more prominent and will energy-related votes become more coveted in future elections? Probably, but until those issues are actively affecting the lives and active livelihoods of voters then they likely won’t receive the top focus that perhaps they deserve.