Broker eXcelerate Series: Why Is It So Difficult to Build New High Voltage Power Lines? 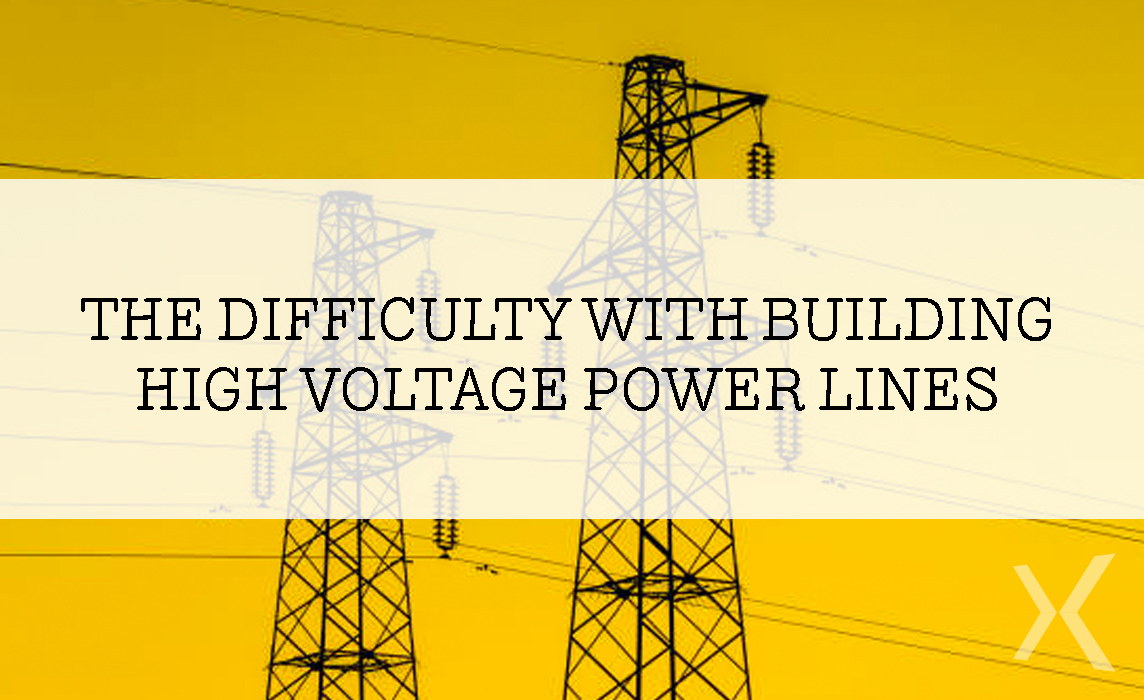 Broker eXcelerate Series: Why Is It So Difficult to Build New High Voltage Power Lines?

Many energy industry experts have noted that the power grid can be considered the most complex machine built in human history, representing one of the truest and most visible engineering marvels we come across in daily life. And while much of the energy industry attention in mainstream discussions is focused on generation—e.g., the shift towards renewable energy generation, the debates around nuclear power, and more—it’s the physical grid itself, the transmission and distribution (T&D) wires which are arguably the most important.

Transmission infrastructure, quite simply, is necessary to get electricity from generation to consumption, including both transmission to nearby consumption for local / distributed generation and the travel over hundreds of miles from central power plants to remote, rural locations. The further that power needs to travel, the more imperative it is that transmission be higher voltage as higher voltage transmission is more efficient and experiences fewer losses thanks to the physics of wire resistance. High voltage transmission is typically considered that which takes place at 1,000 volts or higher, and tapping into the efficiency of higher voltages is something that’s gaining a lot of attention in a way to create a more nationalized power supergrid that can send renewable generation much longer distances than it currently can be transmitted.

But for something as essential to daily life as high voltage power lines are, the energy industry can face quite an uphill battle when it comes to building them out. The places where power is readily generated—because the sun shines bright, because the wind blows consistently, because the central power plant has been built, or otherwise– is not always where the power is needed, considering the clustering of dense energy consumers in large cities or industrial parks. Even as blackouts plague California thanks to transmission congestion and price spikes due to limited transmission capacity occasionally pop up, the key solution of new transmission power lines remains a hard to sell proposition.

Resistance from Nearby Homeowners and Businesses

From a practical standpoint, most people simply don’t want their home or business located near large powerlines as they are viewed at best as an eyesore (they are, in fact, quite large, hard to miss in any view, and are way more industrial than architecturally chic) and at worst as a risk to health and safety. For the latter concerns, many people have the unfortunate conception that proximity to these pieces of infrastructure may cause cancer or other health hazards, despite evidence from scientists, health officials, and other experts that prove otherwise.

Regardless of the reason for resistance and whether or not it’s a well-founded concern, properties near transmission lines verifiably tend to not sell well, sell for less money, and are prone to experiencing higher turnover on the market. Given those facts, proposals for new transmission lines are often subject to immediate and emotional backlash from those who own nearby property. And because high voltage power lines are massive structures and need a continuous connection, there needs to be right-of-way purchasing before a utility operator can acquire the necessary land. This requirement opens the projects up to pushback and rejection from local communities.

Another conventional hurdle for any large-scale infrastructure project is the typically high costs. As noted earlier, the transmission grid is arguably the most complex and impressive engineering feat society has created, but it was built up over decades in a gradual way and improved upon over time.

Today, though, new transmission becomes quite a costly endeavor. For example, some estimates put the cost to replace the grid entirely (which some argue is necessary for a completely clean energy transition) in the range of $5 trillion—yes that’s trillion with a T. Seldom can a conversation deal with final bills that are that high and expect to swiftly garner a consensus that would be needed for implementation. And even though individual projects and high voltage power lines would only make a small fraction of that total transformation amount, it still shows the immense scale that must be dealt with for new transmission projects.

To make such projects even more of a headache, the costs when debating and planning new transmission projects are often just best estimates that carry immense uncertainty. As with generation projects or any other infrastructure at this scale, overruns of cost, time, and resources are quite common, a fact which can be latched onto by opponents of the projects.

So, despite many studies and advocates pointing to the transmission grid as the key to how we can solve much of our coming energy and utility challenges, the sector is simply dealing with costs that cause many to balk. And when you bring it to the local scale for the individual projects, these are costs that are being passed onto the ratepayer and/or the taxpayer. Care must be taken with any of these decisions, and budget hawks are quick to jump in and oppose these costly projects.

Another consideration that often gets in the way when debating the building of new transmission comes from the fact that these pieces of equipment are simply massive, extended, interconnected builds that require immense impact on the local environment and ecosystems.

To start, these projects can rarely completely avoid wilderness areas, meaning the natural environments and the wildlife that call those places home will be impacted. This type of impact of course requires consideration of long-term impacts and the study of potential unexpected effects. For example, biodiversity will be impacted in some way, which can have notable ecosystem and environmental fallout as a result.

Beyond the wildlife impact, other types of environmental considerations include agricultural land and potential agricultural land. Considering the massive footprint of new high voltage power lines, is such infrastructure the best way to utilize the inherently limited natural resource of land? Will agricultural practices in a region be negatively impacted as a result?

Beyond that, the simple impact on the landscape and the inherent value people place on being able to escape to nature and not have views obscured by manmade structures must be considered when planning high voltage power lines.

So, when considering a new transmission project, localities will need to consider how their ecosystems will be impacted, from the migratory patterns of regional birds to the runoff from waterways and more. These factors all get studied in great detail during the debate and approval process of any new transmission line, though environmental advocates may argue that these considerations don’t carry enough weight with decision-makers when being debated in total.

All of the previously discussed arguments can be placed in the ‘con’ list of any pro and con list for considering the viability and desirability of new high voltage power line projects. But the reality of the situation in U.S. power markets is that it’s a hodgepodge patchwork of regulatory bodies who end up making the final decisions. These regulators must weigh the cons from concerned stakeholders while also considering the net pros to the grid, to the economy, and to the surrounding regions. As Bloomberg Energy experts note, “The problem is getting approval. Ownership of the U.S. power grid is balkanized, Nimby-ism is common, and the Federal Energy Regulatory Commission has been reluctant to override local authorities to get lines sited.”

Because the U.S. power grid is so vast, the consideration of new transmission lines is subject to numerous jurisdictional debate and needs to be proven to be beneficial to get approval at all necessary levels. That reality makes building new high voltage power lines particularly tough. But the energy needs across the country are only growing as populations grow, cities get denser, and climate goals increase the need for transmission of local renewable generation and widespread electrification. With electricity consumption expected to grow over 30% from 2020 to 2050, inaction is not an option. The growth of the grid will be prominent in the coming years—as outlined in the prominent plans of political leaders (including in President Biden’s campaign platform), the buildout of the grid will be coming and that includes high voltage power lines. The economic stimulus and jobs created will be a plus, but the long-term availability of reliable, affordable, and clean energy make it an imperative.