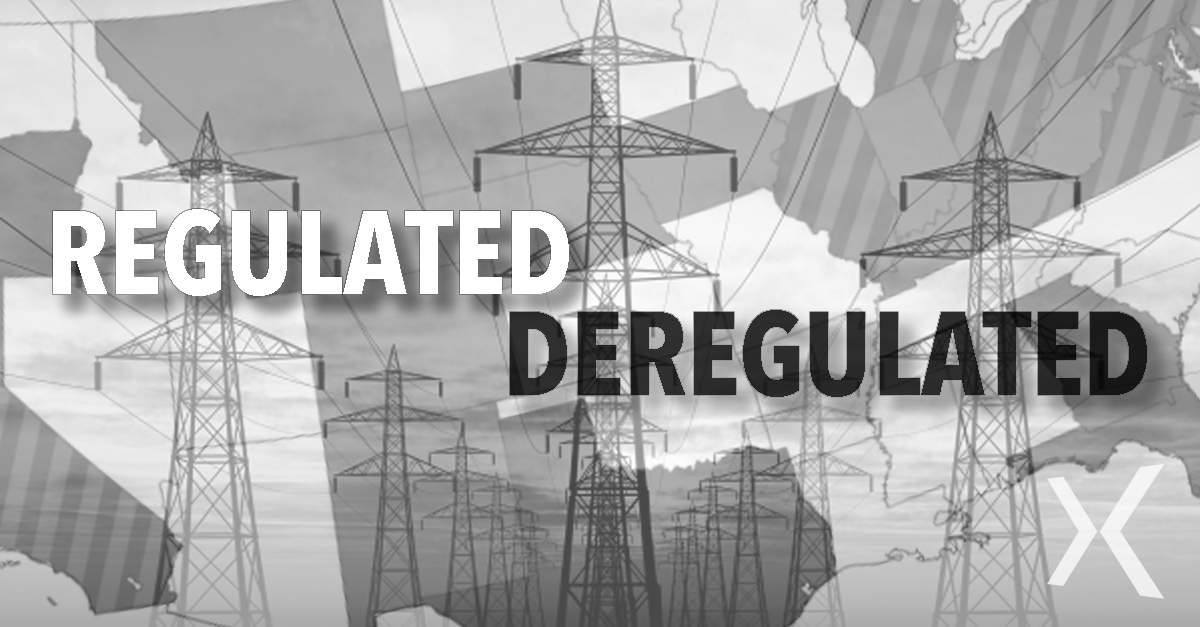 Electricity being delivered directly into homes and businesses is not a luxury, but rather is a fundamental necessity for the modern way of life. Lack of access to power can be a safety issue, can be detrimental to health, and is a recipe for economic disaster, which is why the reliable and affordable availability of electricity is seen more as a right than an optional product or service.

Because electricity is such a fundamental building block, the rules governing power providers differ from most other industries in a modern economy. Governments want to ensure that all citizens have fair access to power and that utilities aren’t unduly overcharging customers for the sake of profit. As a method to ensure citizens aren’t exploited or ignored by power providers, most of the United States is operated under regulated utilities, an arrangement that means there is only one power provider available to each customer and they don’t have any options to switch if they’re unhappy. However, a growing portion of the country is passing laws that allow for a deregulated energy market, which breaks up those natural monopolies of legacy utility companies and provides them a degree of choice in energy provider.

Put simply, a regulated electricity market means that all the utility providers in that service area (whether state or region of the state) own and operate all electricity infrastructure and delivery. These markets may have different utility companies involved in the process, such as a single generation utility and a single transmission utility, but for the customer receiving the energy, it means that there is only one option for them at each step of the power delivery process. The availability of just one provider is why regulated utilities are known as monopolies, but they are a specific type of monopoly that is allowed by the government that would otherwise eliminate monopolies in most other types of industries. But to prevent these natural monopolies in regulated utilities from becoming exploitative or damaging to the consumer who has no way out of being a customer to said utilities, regulatory commissions are heavily involved (hence the term ‘regulated’ utilities). Anytime regulated utilities want to make a big decision that will impact customers, such as raising the rates, investing in expensive new infrastructure, or changing program offerings, these regulated utilities must make the case for those changes to the regulatory bodies to ensure the customers are being kept as the top priority rather than any corporate profits.

On the other hand, deregulated utilities operate more similarly to other industries where customers can choose which provider they want to use. In a deregulated energy market, customers can look at the landscape of utilities offering power in their market and make the choice that makes the most sense to them about which they would like to use. However, choosing a different utility in a deregulated market isn’t simply like choosing a new grocer or hairstylist, as there is only one physical transmission and distribution system to deliver power to customers and it would be impractical and insanely expensive to build out multiple grids for each provider. Instead, customers who opt to change their power provider will still get their energy delivered through the same infrastructure and will even still receive the same bill each month, but what changes is where the money being paid by the customer goes. If the customer chooses to switch from Utility A to Utility B for their power generation needs, the portion of their monthly bill going to power generation will also go to Utility B to pay for the electricity that the provider generated equal to the amount the end customer consumed. In this way, the market of customers supporting and paying for the services of their desired utility provider is preserved, but the customer also gets to benefit from no need for new installations of hardware or connections and simply continues to pay their monthly bill like they always did.

All utilities were operated under a regulated system since the early 1900s at the birth of the utility industry, as governed by the Public Utility Holding Company Act of 1935. Fast forward many decades to 1992 with the National Energy Policy Act, and the beginning of energy regulation was afoot in the United States. Based on this federal policy, state-by-state the decision could be made to deregulate utilities and open up the energy markets. Until such laws are made within states, though, the default arrangement is still for regulated utilities.

Advantages and Disadvantages of Regulated vs. Deregulated

At its core, the change of a region or locality from purely regulated utilities to allow for deregulated utilities is a shift towards consumer choice. Under a deregulated utility arrangement, customers can choose which company provides their electricity, and they can make that choice based on whatever criteria is optimal for them (rather than accepting the status quo of a regulated monopoly utility):

In the end, though, the point is that each customer can make the decision about their power provider that’s right for them, just as they would for most other products and services in the free market. Customers with differing priorities will opt to make different choices, and utilities in these deregulated markets will seek out new ways to reach and attract new customers while maintaining the satisfaction of existing customers. So, not only will customers benefit from their right to choose in a deregulated market, but they can be assured that power providers in these markets will also be even more incentivized to provide reliable service, top-notch customer service, and competitive rates because if they don’t then they risk losing customers to their competitors. That dynamic between seller and buyer exists in most other capitalistic transactions and serves as a terrific motivator for businesses to be at their best, so it should come as no surprise that it works so well in the power industry as well.

That said, deregulated utilities are only available to a minority of Americans and that fact is because there are certain advantages of the regulated utility market that not all leaders and customers are willing to overlook. Customers who get their energy from utilities under a regulated energy market, for example, are assured long-term stability in prices and offerings. Regulated utilities are overseen by the regulatory bodies to protect the consumer, and any major decision is made in the interest of those customers as determined by said bodies.

Upon learning about deregulated utilities and their potential advantages, most customers will ask the natural follow-up question: can I opt for a new power provider? Are my energy markets deregulated?

Another layer of complexity comes from the availability of deregulation compared with the actual implementation of energy choice for the consumer. The ability to choose power provider only exists in the specific markets that are deregulated, meaning that leaders in the region have specifically passed laws to deregulate the market and break up the utility of the sole utility. But to make the mapping of where deregulated utilities exist even more confusing to the common customer, a state passing a law to allow for deregulated energy markets does not necessarily mean that customers do, in fact, have their choice of power provider. Deregulation laws are the necessary first step, but after the laws are passed the newly legal option for consumer choice in power providers must then be specifically pursued by local municipalities and/or energy providers. In Colorado, for example, the law allows for natural gas utilities to offer choice to their customers about what provider their gas comes from, but to date, no utilities have engaged in this option.

Lastly, the availability of choosing an energy provider in a given region is not available equally to all customer types. The way that utility deregulation laws are arranged in certain areas only offers the ability to switch to new power providers to certain classes of customers, such as just industrial consumers or just consumers who use a certain high threshold of energy each month. In these regions, a warehouse or a manufacturing plant may have the ability to choose a new power provider in a deregulated market whereas a regular residential customer will still be in essence stuck in the utility monopoly of a regulated market.

With all of those caveats out of the way, though, it still leaves the critical question of where utility markets are regulated vs. deregulated. As of 2020, the map and the table at this link that’s kept updated by Electric Choice provides an up to date snapshot of where markets are deregulated and to what degree.

However, customers must also note that the state of energy markets is not static, and in fact in certain areas customers are restricted to regulated utility markets but progress is being actively made to open up the markets to be deregulated, whether by grassroots efforts, by debate in utility regulatory bodies, or in potential action by state political leaders. In addition to the above-mentioned states where deregulated utilities are allowed, the following states are seeing active progress towards deregulation:

These developments represent just a handful of the active debates across the county on energy deregulation, with the topic being a constantly evolving one subject to local nuance and updates. If you want the most up to date information on whether you have the opportunity to choose a new power provider in a deregulated market, the best bet is to consult an up-to-date expert on the topic. At BrokerX, we can give you all the information you need to know what your choices are as a consumer, so reach out to us today if you have any questions at all!